TO BUY
INDICATIONS FOR USE ACTIVE COMPONENTS MECHANISM OF ACTION ingredients

Possesses anti-inflammatory properties. The effect of active oxygen is intended to suppress the anaerobic microflora. Enters hard-to-reach areas that are difficult to clean with a toothbrush and toothpaste. Has a pleasant, refreshing taste.

Thanks to the effects of active oxygen, whitens both the outer and inner enamel, effectively combats bad breath, alleviates inflammation and bleeding of the gums.

The effect of the mouthwash is directed at suppressing the anaerobic microflora, which allows for an elimination of halitosis and a significant improval in the health of the gums. Clinical trials have confirmed the absence of any risk of an increase in the sensitivity of the teeth.

The combination of a whitening toothpaste and the new R.O.C.S.® Whitening Black Edition mouthwash allows for a significant (70-90%) increase in the effectiveness of dental whitening, thanks to the effects of active oxygen.

- Whitens the enamel bothe deep inside and on the surface of the teeth
- Effectively combats bad breath
- Alleviates inflammation and bleeding of the gums
- Visible results in the shortest possible timeframe
- Has a pleasant and refreshing taste
- Ideally suited for tea, coffee and wine enthusiasts. Helps preserve the natural whiteness of the teeth

Not to be used by persons under the age of 18

Active Oxygen whitens both the outer and the inner enamel

Thanks to its properties, active oxygen whitens both the outer and the inner enamel, effectively combats bad breath, alleviates inflammation and bleeding of the gums. 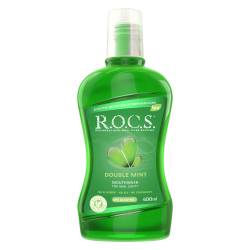 Protects the teeth and gums based on natural ingredients